Quick Overview DESIGN INSULATION FEATURE PRICE SEE ALL COOLERS CHECK PRICE ON AMAZON The last thing anyone wants to worry about when they’re out enjoying themselves at the lake or at the local tailgate is whether their beverages and food are going to stay cold. In order to maintain a stress-free event, investing in a END_OF_DOCUMENT_TOKEN_TO_BE_REPLACED

Quick Overview DESIGN INSULATION FEATURE PRICE SEE ALL COOLERS CHECK PRICE ON AMAZON When you’re getting ready to head out on a wonderful excursion into the beautiful outdoors, packing up your cooler is one of the most important steps. Depending on how long you’re out there, you want a cooler that can keep your foods END_OF_DOCUMENT_TOKEN_TO_BE_REPLACED

Take a moment to imagine this scenario: it is summer and you have an evening hangout with your buddies by the beach and are tasked with getting the drinks. As the evening approaches, a cool idea pops up in your head, and you are confident you can pull it off. You see yourself making an END_OF_DOCUMENT_TOKEN_TO_BE_REPLACED

Quick Overview DESIGN INSULATION FEATURE PRICE With all the nice features added to this very handy deep freeze cooler from the Arctic Zone, you will want for nothing. It is the ideal piece of gear you should have for a day on the court or out on the water on your fishing expedition. We will END_OF_DOCUMENT_TOKEN_TO_BE_REPLACED

Quick Overview DESIGN INSULATION FEATURE PRICE Igloo is a brand whose mission since 1947 has been to redefine how we live, work, and play by making life better. The brand works tirelessly to innovate, create, and develop products such as the Igloo Heavy-Duty 25 Qt Cooler. Any household needs to have a good cooler that END_OF_DOCUMENT_TOKEN_TO_BE_REPLACED

Quick Overview DESIGN INSULATION FEATURE PRICE Are you looking for the ideal cooler bag for your picnics, sporting events, camping, or other fun outdoor activities? If so, Maelstrom has got you covered with the Maelstrom Soft Cooler Bag, a product designed to keep your refreshments and food cool for an extended period. Maelstrom is a END_OF_DOCUMENT_TOKEN_TO_BE_REPLACED

Yeti Coolers are the industry standard for a reason.  If you’re looking for a highly robust hard cooler with fantastic engineering that can also double as a portable stool, then the new Yeti Roadie 24 might be your next best purchase. This Yeti Roadie 24 review will show a cooler with a fantastic build quality, excellent cooling performance and a simple yet effective design.

While it might not be the easiest item to bring on those long-distance trips, it is ideal for boating, camping, and car trips. In this review, we will break down everything you need to know about in this new Yeti Roadie 24 cooler review.

Read on for more information about what this cooler has on offer for you and your cooling needs. 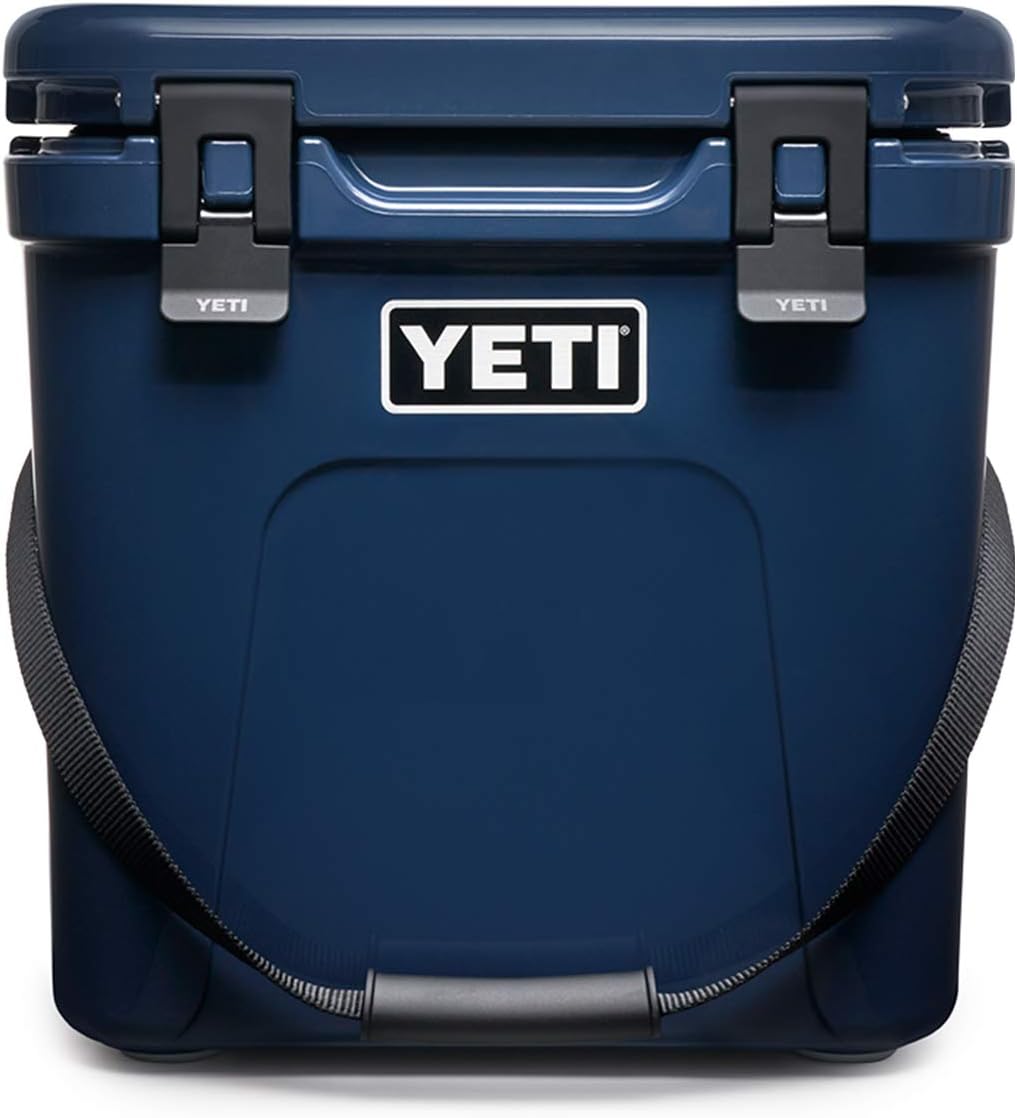 Is Yeti Discontinuing the roadie 24

No, Yeti has discontinued the roadie 20 in favor of the 24

Why is Yeti Discontinuing the Roadie 20?

They ceased production of the Roadie 20 due to complaints about the weight, size and usability of the cooler.  All of these have been largely improved on for Roadie 24

How long does the Yeti Roadie 24 Keep Ice?

How many cans does a Yeti Roadie 24 hold?

The Yeti 24 will hold 18 twelve ounce cans plus ice.  This is an improvement over the 20 and still weights less.

Does the Yeti Roadie float?

The Yeti roadie does indeed float!  The plastic insulation help keeps in afloat.  it's important to remember that the cooler is not waterproof even if completely sealed.

The new yeti Roadie 24 is a great update to the original yeti roadie.  The Roadie 24 cooler is one of the smaller coolers that Yeti produces from their vast range of products that vary in size and shape. It was launched as a more practical solution compared to some of the company’s other, larger coolers.

A few things will immediately catch your eye when you first gaze upon the Roadie 24. It is a suitable size compared to most commercial cooler boxes, while the quality of its build has an overall robust feel. The whole model is seamlessly rotomolded in the same way to a bucket, which makes the cleaning process simple and completely hassle-free.

It is also virtually waterproof, performing 30% better in the thermal department than its predecessor, the Roadie 20. Yeti has also claimed that the minor increase in the product’s height allows for a regular bottle of wine to be stored standing up within the cooler.

The Roadie 24’s immediate tactile elements are its handle and latches, which have undergone a nice redesign from previous models. The latches are particularly pleasing, as they operate easily with a single hand and have a slick feel to them - they’re perfect for more dynamic uses, like going for a picnic.

Who is the Yeti Roadie for?

Suppose you are on the hunt for a highly robust cooler box that will insulate your food and drinks well while being incredibly secure. In that case, the Yeti Roadie 24 is definitely worth your consideration. It is comfortable to use, and while it might not be the easiest to bring around with you, its numerous benefits far outweigh that one con.

However, if you are not looking for a ton of space in a cooler box and instead just want something that will be able to carry a few cold drinks and a sandwich, then perhaps the Roadie 24 is not the one for you. It has a very impressive capacity, which might actually be too large for some people, which sounds odd, but if you know, you know.

All in all, this is a fantastic cooler that is worth anyone’s consideration, and if you’re on the hunt for a good cooler box, then the Yeti Roadie 24 should most definitely be on your radar.

You don’t really get much else with your cooler box when you order your Yeti Roadie 24, other than the box itself. But then again, what more could you need? The box has everything you might want, with a large storage capacity, secure closure, and watertight functionality that ensures that your food and drinks will always be as cool as you want.

The fabric straps found on this Yeti cooler box is in a league of its own. It is pleasant enough to grip and features a removable, sliding plastic handgrip that makes the cooler box incredibly easy to maneuver. However, the length is a little awkward - it is just a bit too short to place over your shoulder, but it is still long enough that the cooler will remain level to your ankles, which means that you might cause some damage to yourself if you aren’t careful.

The Roadie 24 is a difficult beast to carry. Your best bet is either to recruit another person to take hold of the handle so that the cooler swings between the two of you or to disregard said handle entirely and simply take hold of the molded handles. As for the performance of this cooler, the results are quite impressive.

The capacity of the new Yeti Roadie 24 is an improvement on the Yeti Roadie 20.  Unfortunately, Yeti does not officially list the capacities of their coolers, however, it's common knowledge that the roadie 24 has a capacity of about 23.6 quarts.  This is compared to about 19.9 quarts for the Yeti 20.

The Yeti Roadie has outstanding ice retention.  Tests have shown that a Yeti Roadie 24 cooler packed with 20 lbs of ice kept it in ice form for well over three days.  This Yeti cooler even held it's ice for the most part for up to five days!

The Yeti Roadie 24 can keep your drinks as cool as they would be in a fridge for as long as 48 hours. The entire cooler can remain well below room temperature for as long as a week. Your drinks might still be cool as long as two weeks after entering the cooler, highlighting the fantastic insulating performance that Yeti is known for.

Is The Roadie waterproof?

While the cooler might appear completely watertight with its robust seal, it is not completely waterproof to aquatic penetrations if you don’t have it standing up. This is likely a result of the fact that the seal is taped at a point, which allows for some leakage. This is more of an issue with ice than it is with freezer blocks, but it’s definitely still something to look out for.

Although Yeti does not offer lifetime warranties on their coolers, do offer a limited 5-year warranty.  Soft Yeti Coolers only come with a 3 year limited warranty.  Coolers eligible for replacement under warranty must Must be able to provide proof of purchase from an authorized YETI Dealer.

How to Use this Yeti Cooler

The Yeti Roadie 24 is used the same way as any other cooler! Simply place all of your food and drinks in it, close the lid up, and take it wherever your adventures may lead. 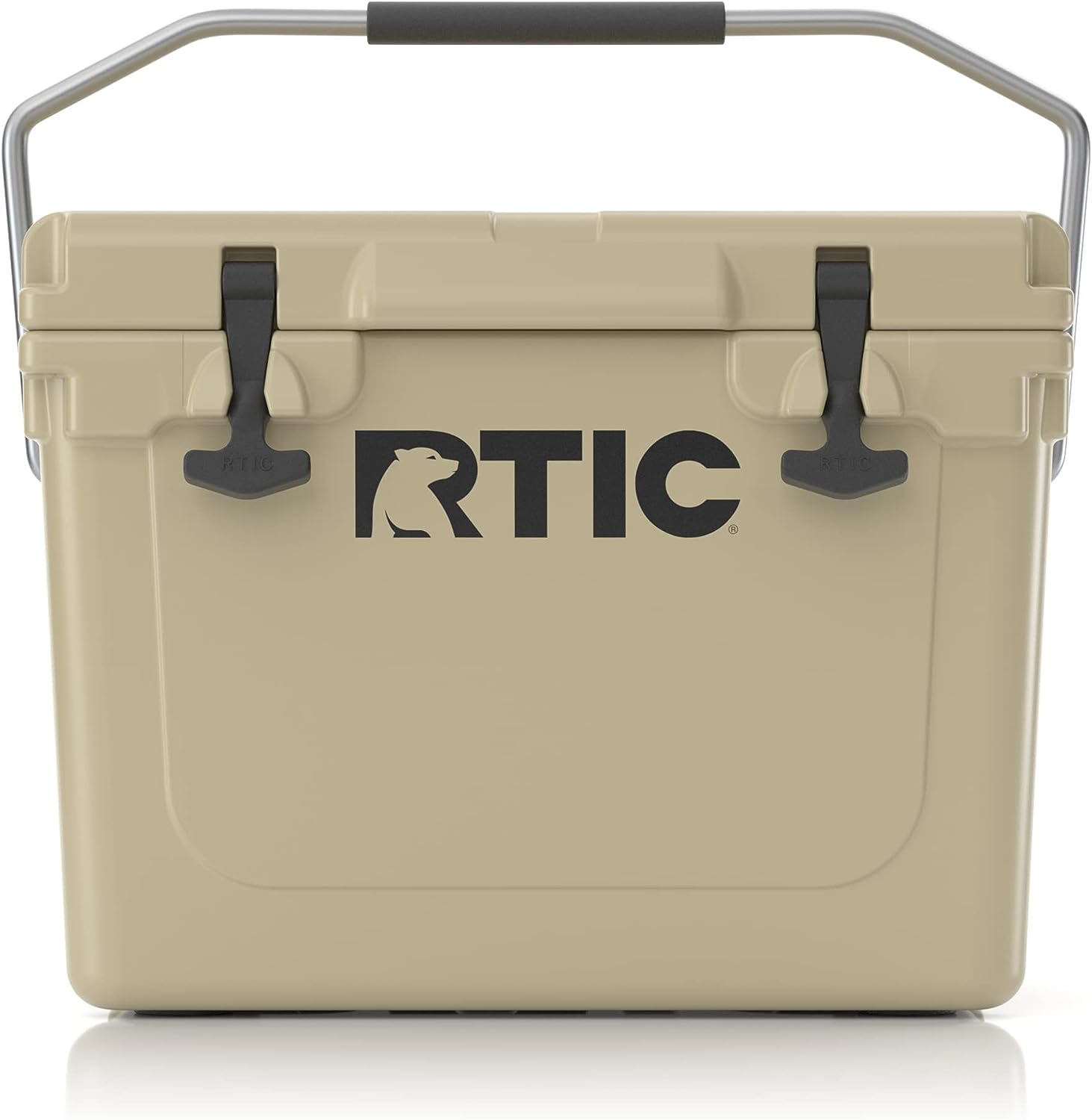 From a dimensions stand point the RTIC hard cooler is the closes to the Roadie, plus the artic version has a drain plug unlike the Roadie 24.  The Price point is much more reasonable as well.  We do prefer the handle of the Roadie compared to the metal handle of the artic cooler.

The Igloo BMX Cooler is the cheapest item on the list.  It also comes in a variety of attractive colors.  It is also the smallest and lightest on the list.  The BMX cooler only weights 11.3 lbs compared to 12.8 lbs for the Roadie 24.  Another bonus for Igloo Coolers is that the are made in the United States. 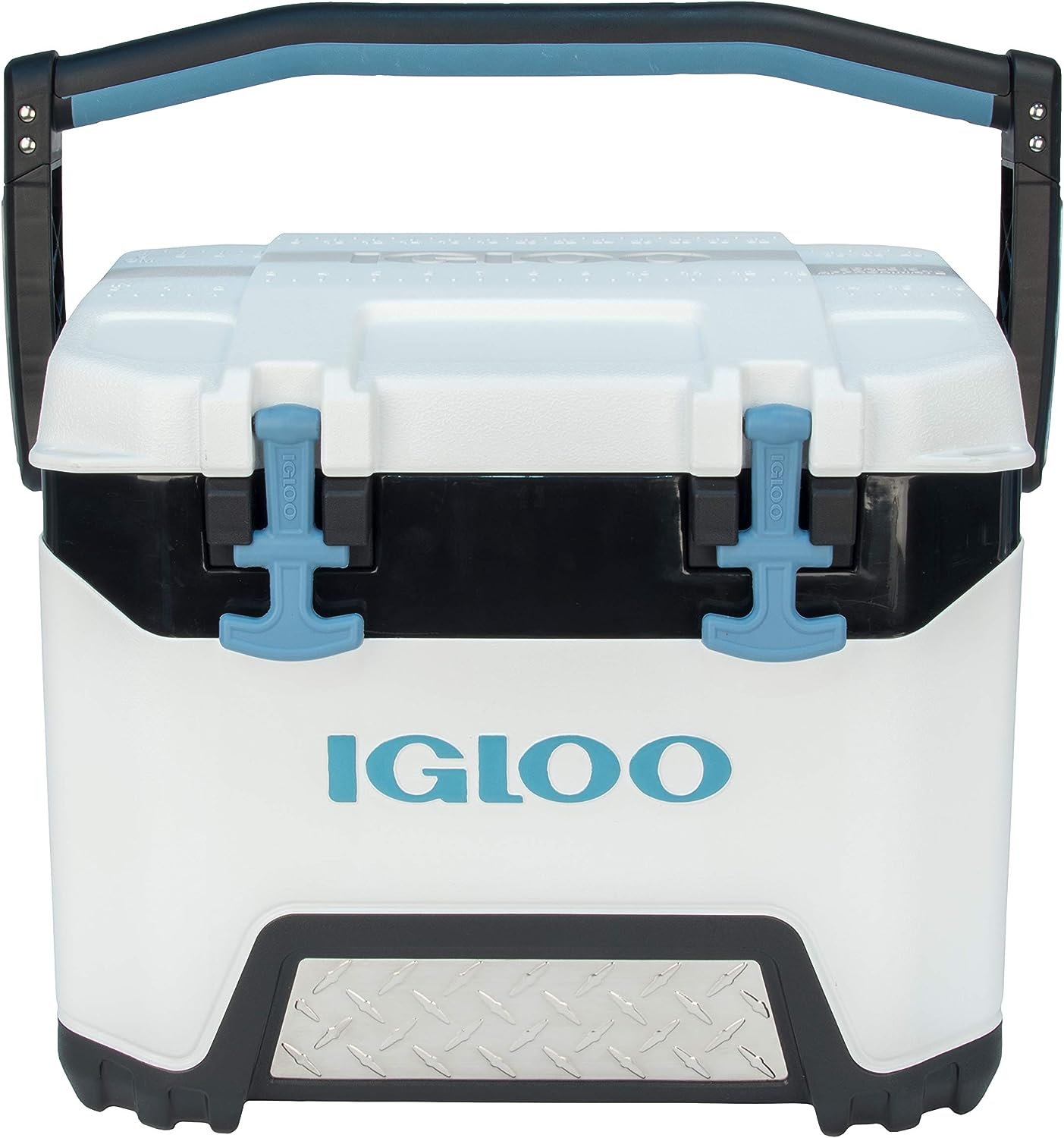 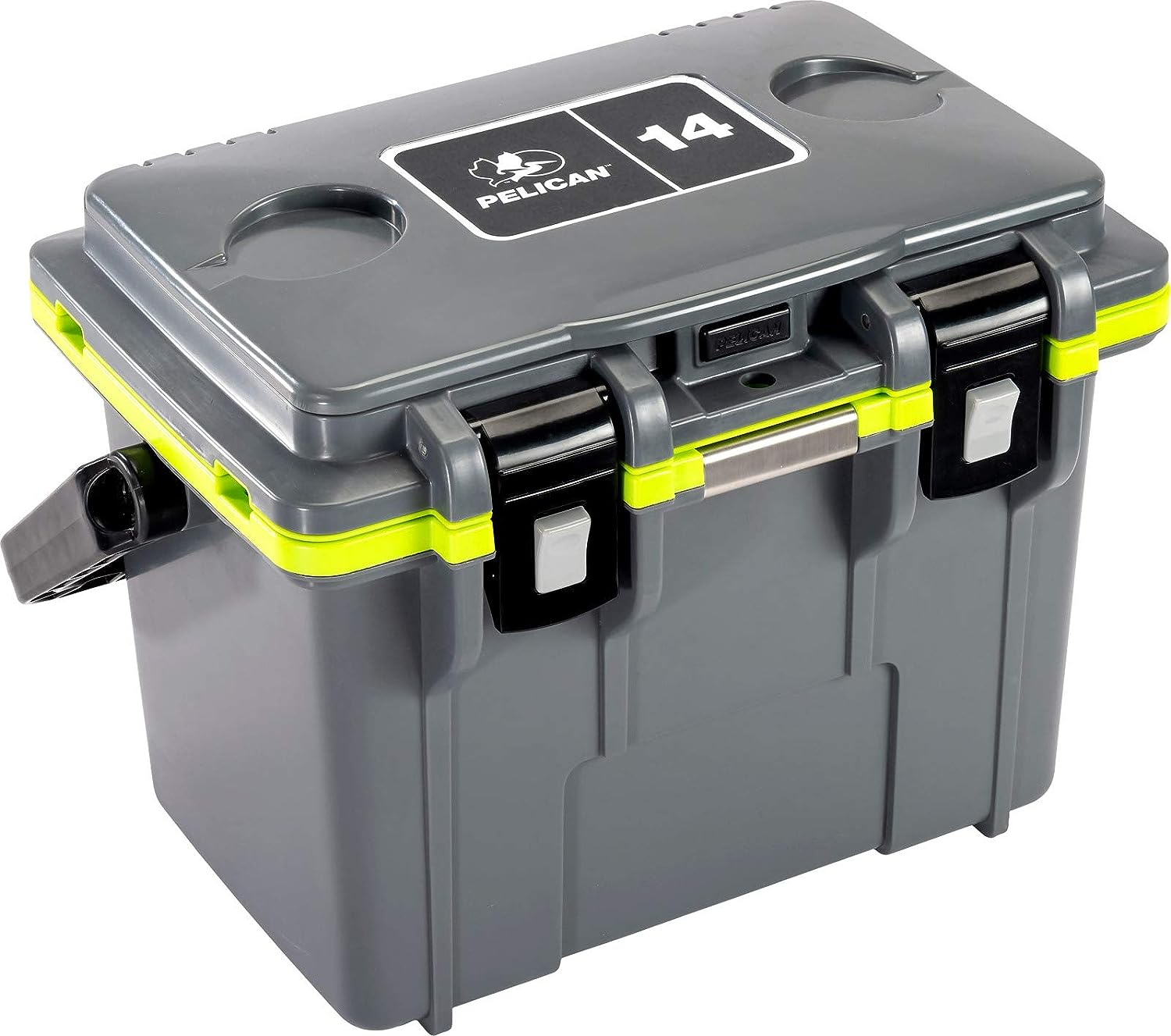 Pelican is another popular brand of cooler, know for there high quality and low prices.  Even though this cooler is small at only 14 quarts it is quite heavy, coming at just under 50 lbs.  It comes in Green, blue or white.  It officially boasts an ice retention of about 36 hours, however we have seen it hold it's ice frozen for up to 5 days.  many people swear by Pelican Coolers.  The ratings on Amazon for Pelican coolers are through the roof.

If you’re looking for a cooler box to take with you on the water during your kayaking trips, we strongly suggest the CreekKooler PuP floating water cooler, which is exactly what it sounds like. It works in the same way as a regular water cooler, just that it floats on the water next to your boat and can be tethered to your vessel to ensure that it doesn’t float away.  The ice retention is not quite as impressive but still more than enough for most situations. 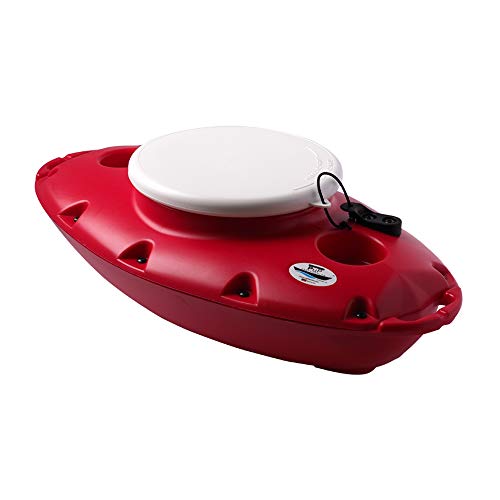 As far as hard coolers go, there’s a lot to like about the Yeti Roadie 24 cooler. It easily fits into cars, stays cold, is built to last, and can be the perfect companion to your next camping trip. So if you are looking for a cooler that will stand the test of time, you should definitely consider this Yeti cooler.  This is one of Yeti Coolers latest offerings and they knocked it out of the park